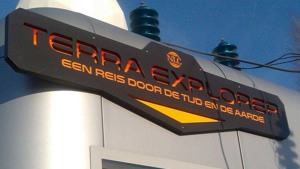 An awesome project done for Jora Entertainment : the dinosaur mural in the Wildlands Terra Explorer. In a small building in the Nortica section, visitors step into an elevator and travel down into the earth to visit a prehistoric world where dinosaurs still live.
Jora Entertainment provided the intro (animated earth layers, sound and decoration of the building itself. Paleo Pixels provided the 1 minute animated dino-mural (second half of the movie).

Due to a tight budget and time constraints (after accepting the project in November, the initial deadline was 5 weeks away), smart choices had to made to actually meet the deadline. Examples are the background, which became a large 2D matte painting done in Photoshop and the re-use of older models Paleo Pixels created in the past.
With a good planning and working 7 days a week, the project was done in time and send of to the client. In January some additional work was done after which the project was signed off.