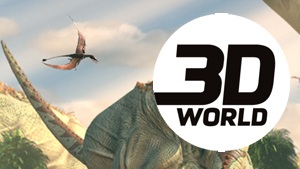 Ever since I was a kid I’m obsessed with prehistoric life; I think it’s just incredible what diversity life has produced so far. This project started when I explained Zbrush basics to colleagues and I realized I really needed to brush up (pun intended) on my Zbrush skills.
The model is based on partially found remains of Puertasaurus, a huge Titanosaur sauropod from the Cretaceous period. It started of in Zbrush with a sphere, dynamesh and zremesher. After that a basic rig was created in Maya to create some poses and checks on deformations while posing between Maya and Zbrush. This way the basic skinning could be fixed in Maya and wrong deformations in the high detail version in Zbrush.
After finishing the low-res animation model, the high-res render version and the diffuse, specular, normal and displacement maps, a muscle rig was created on top of the original rig to get secondary animations in the skin.
After completing this walk-cycle it still felt unfinished and I created a basic composition with a juvenile Puertasaurus wondering about the drinking pterosaur in front of it, while it’s parents are worrying about the pack of Giganotosaurs in the background. 3D World magazine got in touch with me and we agreed on doing an article about it. It got published in the June 2014 edition.