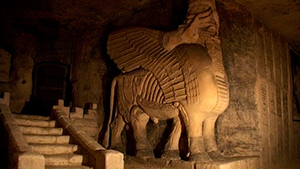 ‘Neighbourhood Watch’ is made in response to the commotion caused by the opening of a refugee center in Maastricht. The entrance of the center was relocated in order to reduce the chance of contact between local citizens and asylum-seekers. The project proposed a symbolic alternative for this forced separation by inserting a cultural artifact within the neighborhood that is both local and foreign. The intervention was based on a Mesopotamian bull man statue from the old entrance to the Jesuit caves in Maastricht, once sculpted by local Jesuit-scholars as an expression of interest in other cultures. The statue was scanned, animated and used for a mobile projection in the streets surrounding the refugee center. The video is produced by Wouter Osterholt and Ingrid Hapke for the exhibition ‘The Measure of Our Travelling Feet’ in ‘Marres’, Centre for Contemporary Culture, Maastricht, NL. (25.09.2016 – 27.11.2016) Acknowledgements: Laura Mudde and Claire van Els (Curators), Frank Broos (3d scan and model), Bjorn Klaassen (Animation), Remy Heckers (Jesuit Caves), Sjors Bindels (Mobile projection) and Beam Systems (Projector)