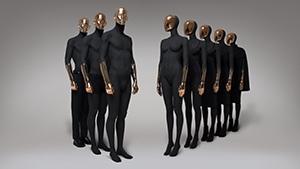 Begin 2015 Hans Boodt Mannequins and me got in touch to develop some extra tools in Maya for their mannequin posing. The feature list :

Seamless switching between FK,IK & point based rigs.
This way a base rig can be controlled by 3 different systems and with 1 button the user can switch between them. FK is rotation based, Point is translation
based and IK has IK for the limbs and a spline IK for the spine.

Exact skin weight imports and exports
Instead of using the weight maps export , the exact skin weights values are exported into 1 text file. This way all information is preserved in large floating point numbers.

Relative scaling
Of a set of objects, the last one selected acts like the reference. This can be useful in situations like this one : a model has a hat and a set of gloves. The hat needs to be exactly 30 cm. high, the rest needs to be scaled accordingly.

Measurement function set
In general 2 ways to measure the mannequins are present. 1 is based on curve projections from a dummy object. The rotation of the dummy object controls the projection vector and the scale controls the start and end points of the projection. The other one is one that mimics a real world ruler; the user sets out points on a model and the distances between those points are counted into a total value. For both systems a scriptjob is created that displays the lengths
in the viewport.

Pose imports and exports
All poses can be saved and imported (on the same of another model, even with different numbers of spine/neck joints). While saving a pose, a thumbnail is generated which is loaded into the UI. When middle-mouse clicked, this particular pose gets imported. After the final pose is approved, the mannequin is exported to a CNCmachine for real-size production.