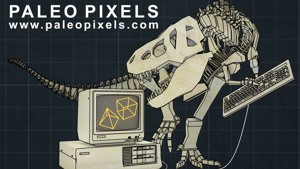 Paleo Pixels needed a recognizable image for its website, business card, logo etc.
I thought of something that would summarize the company as a whole, both with paleontology and computer graphics but it also needed a small joke.

As a coincidence, I just had a rough T-Rex skeleton model laying around which was only used as an example in a pitch. I used it in this composition with an old computer. Since a whole skeleton became too noisy on something as small as a business card, I turned it down to 2 3D primitives.