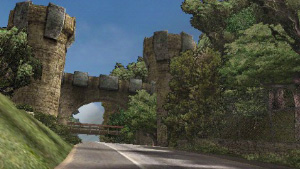 While working in the gaming industry I wanted to learn more about the whole production process, so that’s why I produced 2 racetracks for the game Rfactor. This way I did the whole process from initial design to actual modelling and texturing but also planning and beta-testing.
Both tracks are fantasy tracks, inspired by trips through the German woods. The Eifel track is situated around an old German castle, Autobahn was created around a fictional modern city with a large piece of Autobahn next to it. Both projects acted as a base to start working on the TrackMaker plugin for Maya, which speeds up the whole process of designing and producing racetracks.